On a recent Saturday afternoon, the mayor of Jennings, a St. Louis suburb of about 15,000, settled in before a computer in the empty city council chambers. Yolonda Fountain Henderson, 50, was elected last spring as the city’s first black mayor.

On the screen was a list of every debt collection lawsuit against a resident of her city, at least 4,500 in just five years. Henderson asked to see her own street. On her block of 16 modest ranch-style homes, lawsuits had been filed against the occupants of eight. “That’s my neighbor across the street,” she said, pointing to one line on the screen.

This story was co-published with Marketplace.

Have You Been Sued Over a Debt?

You can help us investigate questionable debt collection practices by completing a short survey about your experience. 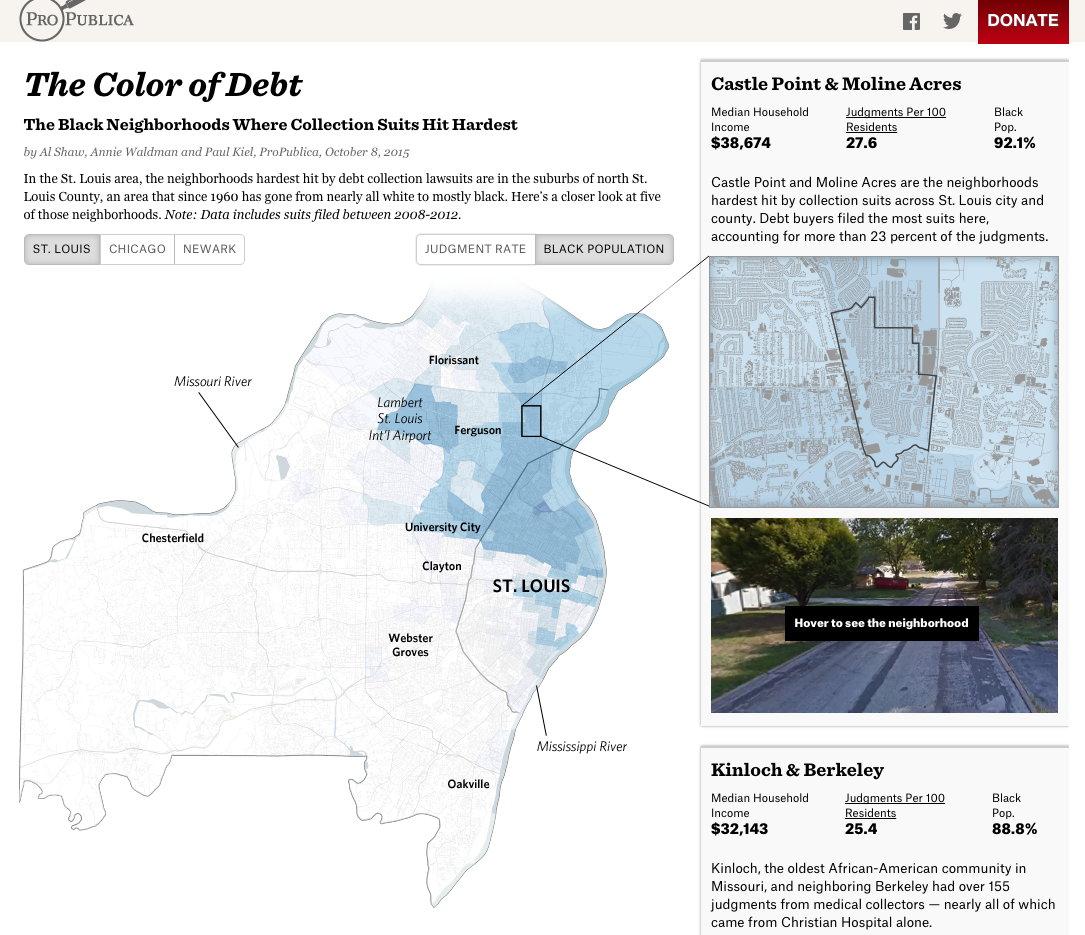 And then she saw her own suit. Henderson, a single mother, fell behind on her sewer bill after losing her job a few years ago, and the utility successfully sued her. That judgment was listed, as well as how one day the company seized $382 from her credit union account — all she had, but not enough to pay off the debt.

As the lines of suits scrolled by on the screen, Henderson shook her head in disbelief, swinging her dangling, heart-shaped earrings.

“They’re just suing all of us,” she said.

That’s not only true in Jennings. The story is the same down the road in Normandy and in every other black community nearby. In fact, when ProPublica attempted to measure, for the first time, the prevalence of judgments stemming from these suits, a clear pattern emerged: they were massed in black neighborhoods.

The disparity was not merely because black families earn less than white families. Our analysis of five years of court judgments from three metropolitan areas — St. Louis, Chicago and Newark — showed that even accounting for income, the rate of judgments was twice as high in mostly black neighborhoods as it was in mostly white ones.

These findings could suggest racial bias by lenders or collectors. But we found that there is another explanation: That generations of discrimination have left black families with grossly fewer resources to draw on when they come under financial pressure.

Over the past year, ProPublica has investigated a little-known but pervasive shift in the way debt is collected in America: Companies now routinely use the courts to pursue millions of people over even small consumer debts. With the power granted by a court judgment, collectors can seize a chunk of a debtor’s pay. The highest rates of garnishment are among workers who earn between $25,000 and $40,000, but the numbers are nearly as high for those who earn even less.

Despite their prevalence, these suits remain remarkably hidden, even to people in the communities most burdened by them.

In the city of St. Louis and surrounding St. Louis County, where Jennings lies, only about a quarter of the population lives in neighborhoods where most residents are black. But over half of court judgments were concentrated in these neighborhoods.

April Kuehnhoff, an attorney at the National Consumer Law Center, said that the analysis raised “crucial questions about how racial disparities are entering the debt collection system and what we can do to eliminate these disparities.” The findings, she said, should spur lawmakers to reform overly punitive federal and state collections laws.

Collection suits — typically over smaller amounts like credit card debt — fly across the desks of local judges, sometimes hundreds in a single day. Defendants usually don’t make it to court, and when they do, rarely have an attorney.

For those who do show up, the outcome isn’t all that different. In Missouri, most judgments resulted in the plaintiff attempting garnishment, whether the defendant appeared in court or not, according to ProPublica’s analysis.

In Jennings, which since the 1960s has shifted from almost entirely white to 90 percent black, the suits are unrelentingly common. Between 2008 and 2012, there was more than one lawsuit for every four residents. And yet, this fact astounded residents when they heard it, because it is a facet of life that most keep private. Parents hide it from their children, and neighbors never think to discuss it.

The typical household income in Jennings is about $28,000, an income level at which families spend, on average, all of their income on basic necessities, federal survey data shows. Each paycheck must be carefully apportioned with the most vital costs — mortgage or rent, food and utilities — prioritized.

A garnishment hits this kind of household budget like a bomb. Federal law and most state laws protect only the poorest of the poor from having their wages seized, otherwise allowing plaintiffs to seize up to a quarter of a worker’s after-tax pay. If that paycheck is deposited in a bank, that and other money in the account can be seized to pay down the debt. When garnishment protections do exist, the burden is usually on debtors to figure out if and how the laws protect their assets.

In Jennings, the struggles with debt compound other hardships common to black communities in St. Louis and elsewhere: conflicts and tension with police, and a municipal court system that has jailed residents over unpaid traffic tickets. To Jennings’ northwest lies the city of Ferguson, where the killing of teenager Michael Brown by a police officer last year sparked protests and rioting.

The Rev. Starsky Wilson is co-chair of the Ferguson Commission, a panel created by Missouri’s governor to study the underlying social and economic conditions behind the unrest. Lack of economic mobility is a key issue, he said, and there are two sides of the coin. Improvements in education, job training and wages can push people up the ladder. But equally important, he said, are the forces that drag them down.

“If you’re still stuck in this web of indebtedness, you’re not going to be economically mobile,” he said.

Experts cite many reasons why blacks might face more lawsuits, foremost among them the immense gap in wealth between blacks and whites in the U.S. It’s a gap that extends back to the institution of slavery and, more recently, to 20th century policies that promoted white homeownership while restricting it for blacks.

Today, the typical black household has a net worth of $11,000, while that of a typical white household is $141,900. As a result, while the budget is often tight for any low- or middle-income household, black households are less likely to have resources to draw on when they need it.

In Jennings, that is a reality felt even in City Hall, where, along with the mayor, five of the eight sitting city council members (seven of whom are black) have been sued over a debt — although none of them knew about their shared plight until ProPublica shared its data.

“I’m in a generational hole,” said Miranda Jones, 41, a Jennings city council member and executive with Better Family Life, a St. Louis-based nonprofit devoted to supporting black families. She and her husband have been sued three times in recent years over debts, once resulting in the seizure of $800 from her bank account.

“Coming from East St. Louis from a poor family, I started off in debt,” she said. She managed to transcend those circumstances to attain a college degree, but that accomplishment came with a load of student loan debt.

“I’m trying to break the cycle for my kids, and it’s very difficult,” she said.

Walk the quiet streets of Jennings and ask residents how they came to be sued over a debt, and they will often tell you that there came a moment when they had to make a financial choice.

For Judy Harvey, a 64-year-old retiree who’s lived in the same two-bedroom home with her husband for 20 years, it happened after her hours were scaled back at work. For Gladys Clayborn, 59, who lives in a house around the corner, it was heart trouble that led to major surgery and permanent disability.

However it happened, they found themselves behind on their bills, and they needed to decide which to pay.

“When you rank those bills, you’re definitely going to put those things that are essential to health and safety — that you can’t function without on a day-to-day basis — first,” said Jones, the council member.

Sometimes it’s credit card bills that get pushed to the back of the line. Sometimes it’s an old medical bill or a loan with a 100 percent interest rate. And quite often in Jennings and other black communities in St. Louis, it’s the sewer bill.

The Metropolitan St. Louis Sewer District provides service to almost all of the city of St. Louis and the surrounding county. The bill is not usually a large one — the average monthly rate in 2012 was about $29 for a single family home — but MSD, unlike other utilities like electricity, lacks the power to shut off service to customers who fall far behind.

In 2010, MSD decided too many customers weren’t paying their bills, so it dramatically increased its collection efforts. It went from filing about 3,000 suits in 2010 to filing about 11,000 in 2012, more than any other company that year.

Most of MSD’s customers are white, but the suits were largely filed against residents of black communities like Jennings. ProPublica examined MSD’s court judgments against residents of lower- and middle-income neighborhoods and found that MSD obtained judgments in the mostly black neighborhoods at a rate about four times higher than in the mostly white ones.

When MSD sues, the debts can be quite small, even as little as $350. And the size of those debts may help explain why MSD files so many more suits in black neighborhoods.

ProPublica’s analysis of court data for Newark and Chicago found that the debts that led to suits in mostly black neighborhoods were, on average, about 20 to 25 percent smaller than the debts of residents of mostly white ones.

This suggests white consumers are, in general, better able to resolve smaller debts.

Latanya Graves is a 38-year-old single mother of three who lives in Jennings. Sitting in her living room last August as her children tried to cook pancakes and sent smoke throughout her home, Graves remembered the desperation that set her on the path to having her wages garnished.

After a period of unemployment, she’d tried to save her home from foreclosure by taking out loans at sky-high interest rates — the only kind she could get. And with other more critical bills to pay, she’d let her MSD bill slide.