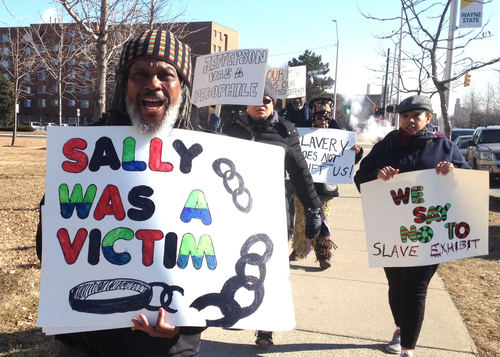 The Black Legacy Coalition protests at the Charles H. Wright Museum on March 12.

Last week, the exhibit “Slavery at Jefferson’s Monticello: Paradox of Liberty” opened at the Charles H. Wright Museum of African American History. The opening was greeted with spirited protests. Everyday people gathered to draw attention to the horrific decision by the museum board to open an exhibit which attempts to sanitize slavery.

On Tuesday morning about 150 people marched outside the museum entrance with signs and chants condemning Jefferson and the exhibit. Some were elders, pushing walkers, wielding  canes, or holding on to outstretched arms.  Some had known Dr. Wright personally, considering him a mentor and friend. Passers-by, high school students, and concerned parents joined the line. Some of the marchers were people who have helped define the intellectual, cultural, and spiritual legacy of African Americans in this country and globally.

All were furious that this museum, dedicated to celebrating the lives and contributions of African and African American people, would host an exhibit that attempts to sanitize the relationship between Thomas Jefferson and Sally Hemings, the woman he enslaved and raped when she was a child of 14. Along with Sally Hemings and their children, Jefferson owned and control more than 600 human beings at Monticello.

The Museum Board needs to do some serious thinking about why it decided to bring this exhibit to Detroit and why it refused to cancel it after members of the community began raising questions. The Black Legacy Coalition (BLC) has been meeting with the Board since September, raising concerns about the Board’s apparent confusion over its mission. The BLC has consistently demanded the museum cancel the exhibit.

The BLC explained that the framing of this exhibit is dishonest. It portrays the relationship between Jefferson and Sally Hemings in ways that imply Sally Hemings might have consented to sexual relationships with Jefferson. It attempts to provide a comfortable way for people to continue to uphold Jefferson and other “Founding Fathers” who supported slavery, killed native peoples, and justified these crimes with claims to white supremacy and economic gain.

This is not an exhibit about Sally Hemings or her life. Her name does not even appear in the title. Rather this is an effort to recast Jefferson as a love interest, not a rapist and a man who was dedicated to upholding slavery in both his public and private life.

The BLC also presented petitions to the Board with more than 17,000 signatures. It says:

“The Charles H. Wright Museum of African American History was founded to serve as a repository and representation of African American culture to affirm our people’s strivings and achievements over several centuries. Our intention is to safeguard the vision of this treasured public institution for its continued service to the Detroit Black community.”

Part of the reason for including Sally Hemings in this exhibit of Monticello has been the recent uncovering of the rooms where Sally Hemings is believed to have lived. It is also a tribute to the hundreds of activists and scholars who have demanded that we face the realities of genocide and slavery as we construct our history.

But the resistance to such an honest conversation continues in this exhibit. Britni Danielle, writing in the Washington Post, provides a scathing analysis of how corporate powers are continuing to evade the realities. She wrote recently:

Romanticizing Hemings and Jefferson’s so-called relationship minimizes the deadly imbalance of power that black people suffered under before the Civil War. It also obscures our collective history as a nation that moved from being built on the blood, bones and backs of enslaved African Americans and indigenous people, to being the imperfect, hopeful and yet still unequal country we are today.

We need to create that collective history. The exhibit at Wright does not contribute to the conversation about who we have been or who we want to become. It contributes to the ongoing lie.